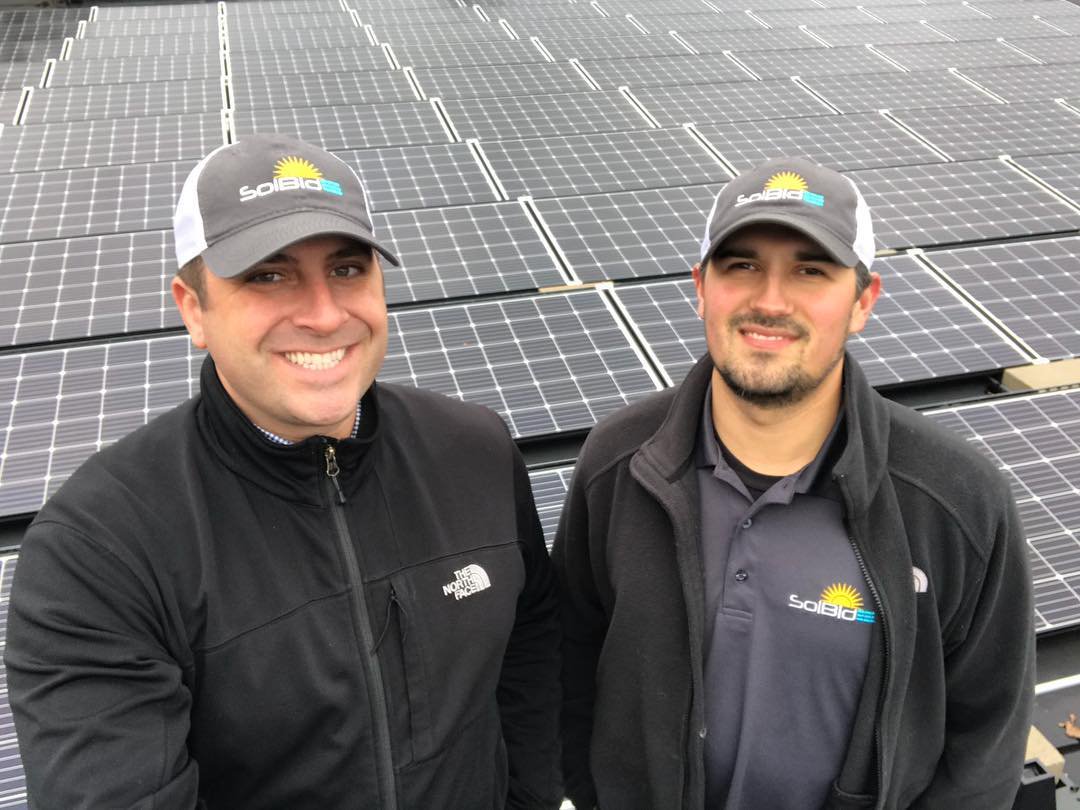 In 2014, friends Nate Raymond and Ian Ricci founded SolBid, a solar energy company focused on the Commercial and Industrial market. Since then SolBid has been making a name for itself in the industry with its unique business model, proprietary technology, and effective market approach.

SolBid is trailblazing a path to accelerate the adoption of clean and renewable energy, reducing our nation's dependence on fossil fuels and making the world a better place.

Nate is an entrepreneur that comes from over 15 yrs of professional business development and business management experience w/ a strong passion for CleanTech.

He lives on the New England seacoast and in his free time enjoys snowboarding, mountain biking, and cars. His entrepreneurial career began out of high school when he founded an auto parts ecommerce store, followed by becoming the President and Co-Founder of the commercial/residential real estate financing company Optimum Lending Group. After his success in the financing space and following the housing market crash, Nate spent a decade as a Sr. Business Development Professional at a world-renowned corporate consulting firm prior to SolBid.

A Springfield, Massachusetts native, serial entrepreneur, and graduate of the UMass Amherst - School of Computer Science. Ian has worked with various internet technology companies and startups within the northeast and mid-atlantic regions. He is an experienced software engineer and business management professional with over 20yrs of experience in the tech industry. He is first and foremost an artist and loves to draw and paint. However, he also likes to build companies and solve complex problems.

At age 17, Ian created his first Internet technology company. Ian has also held the role of senior engineer and CTO at a number of companies. He founded REMAGINE (Internet Services / Software Development Co) and Piddx (an On-Demand skills and Services Marketplace). Over the years, Ian has developed a strong passion for CleanTech and brings his unique perspective to the solar space.

What drew you toward going into business in the solar energy industry?

Everytime the two of us were conversing, we would discuss potential business opportunities for fun, as this was our common interest. We both have always gravitated towards science and technology, so solar caught our attention as a formidable energy technology for its economical and environmental benefits. In discussions we identified the bottlenecks in the customer organization process and were shocked that someone in the industry didn’t yet develop a way to accelerate the deployment of solar. Specifically in the Commercial & Industrial space. So we took it as a challenge and an opportunity and created SolBid.

I understand you both got to meet Daymond John when starting SolBid. How did that come about?

In 2015 when we were in the development phase of the company, we submitted online applications to two business plan competitions, the reSet Impact Challenge and Miller Lite Tap-the-Future. We were selected as Semi-Finalists for both, which was a great honor and very exciting at the time. The Tap-the-Future competition was held in a theatre in Philadelphia and Daymond John was one of the judges. When we arrived, the place was mostly empty and they crammed us in this tiny back room with the other contestants. We sat in there for the better part of 2 hours until we were the first ones called out.

As we walked out onto the stage there was music blasting, a light show and hundreds of people in the audience. To be honest, I think we were both really taken back. It felt like we were rock stars for a moment, and then it all went dead silent, all eyes on us. So we did our pitch, the judges asked us some questions and then we went back to the tiny room. 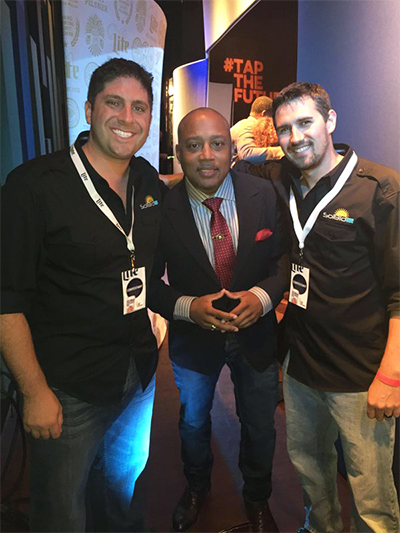 At the end of the show, we were able to connect w/ Daymond for a period of time backstage and he said really liked our business and that we had something really great. As an entrepreneur you have confidence in your ideas, even when other people don’t, because you have to to succeed. But that day, hearing that from such a successful entrepreneur such as Daymond took that confidence to another level, where it has remained since. So it was a pivotal moment for SolBid.

Is starting a company easy?

No, starting a company is very challenging. We both have experiences in starting businesses prior to SolBid, and not all of them succeeded. It’s a known fact that most startup businesses fail. If you look at SolBid as the example, we bootstrapped this company on a shoestring budget. That meant that at the beginning us, as the co-founders had to do everything. We couldn’t afford employees, fancy software, or to even pay ourselves. We worked, and admittedly still do, crazy long hours. It’s non-stop, sometimes up as early as 4:00am to work and sometimes up until 3:00am to complete a task, and hopefully not on the same day. It’s not for the faint of heart, but it’s for those that have the burning passion to succeed and the confidence that what they put in will reward them in the future. This is true for any start up and we both can say, sometimes it takes a few hard falls to get it right.

SolBid is no longer a start up and has become successful, so we now have those luxuries we didn’t have before, but the road to get here wasn’t easy and there is still plenty of hard work to be done as we grow this business.

Since starting SolBid, what changes have you seen in the industry?

Quite a few things have happened since 2014 that have impacted the industry one way or another. The biggest thing is the reduction in costs, which overall have come down about 20%. This is largely due to the greater efficiency in solar modules. For example, the first project we completed had 285W solar modules and the latest project we did is using 425W modules. With more powerful modules comes less mounting equipment, less wiring and less labor cost. Even with the tariffs on solar imposed by the federal government, the industry still showed strong YOY growth figures. Once those are removed, however, the costs will reduce further and the economics of a solar project will be even more favorable.

The U.S. Bureau of Labor Statistics forecasts America’s two fastest-growing jobs from now up through 2026 will be solar installer (105% growth) and wind technician (96% growth), what do you think of this statistic?

This is an accurate assessment of what’s to come. According to the IEA, solar is not the cheapest form of electricity one can obtain and solar is now the leader in new electricity generation being installed across the country. We are at the forefront of a renewable energy revolution, where solar and wind is going to be replacing most fossil fuel energy sources over time. Especially with the R&D focus on energy storage technologies, renewable energy energy installation job numbers are going to keep increasing. As of now, the solar industry alone already employs more people than the coal, oil and gas industries combined.

What are your favorite dinosaurs and why?

The Raptor is our favorite, as it is among the dinosaurs with the very highest level of intelligence. It was agile and able to capture its prey quickly without much effort. These traits are at the core of SolBid and to why we selected to have a 1:1 scale Deinonychus in the lobby of our office dubbed Helios, which is the largest of the Raptor family. 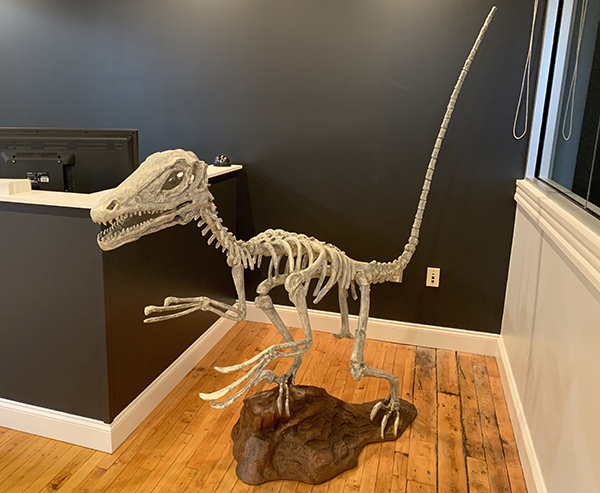 The other dinosaur on here is the Eubrontes. Seeing we are both from Western Massachusetts, we grew up along the Connecticut River Valley. It has a rich history of having some of the best dinosaur tracks in the United States, not to mention the first found in North America. Out of these tracks you can find hundreds of Eubrontes tracks. So we consider that animal a hometown dino. 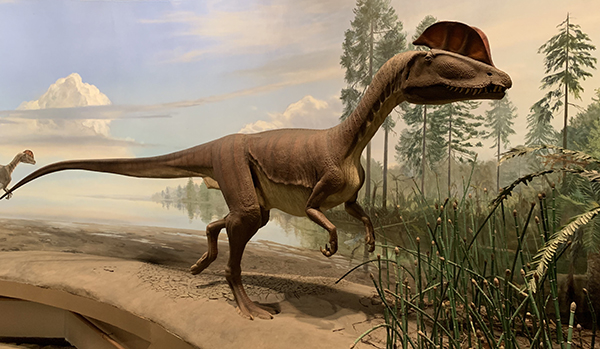